COLORADO SPRINGS, CO (December 22, 2016) — Aventa celebrated the holiday season by sponsoring and participating in the 32nd Annual Festival of Lights Parade in downtown Colorado Springs.  Over 20 Aventa associates and family members participated in the parade held on Saturday, December 3, 2016. The Parade’s theme was “Home for the Holidays.”

This year, Aventa built a float using the Mobile ATM and titled it “Whoville Home for the Holidays”, an homage to the Dr. Seuss classic “How the Grinch Stole Christmas.” The float featured windows with “Whos” peeking out, a Grinch going down the chimney and a dog pulling the sleigh. The Mobile ATM was also draped in holiday lights and associates walked in the parade dressed as “Who’s from Whoville” or as presents.

The parade is an annual holiday tradition for Colorado Springs which travels along Tejon St. in downtown Colorado Springs.  This was the first year that Aventa had participated in the parade. “The parade is a great way for the community to come together and we like to be involved in the community. This is a fun event to participate in,” said Karin Kovalovsky, VP of Corporate Communications and Marketing. 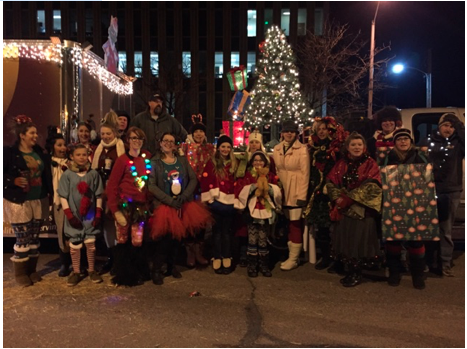 Aventa Credit Union was founded in 1957 by the Colorado Springs Utilities Department. Today, Aventa has grown to more than 21,000 members and $160 million in assets. The credit union offers a wide-variety of financial products and services throughout their branches in Colorado Springs, Pueblo and the San Luis Valley.